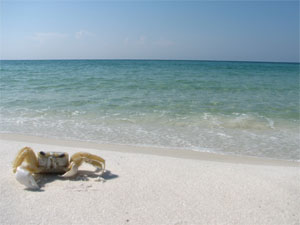 The unique sand of the beaches in the Destin area is among the whitest and most homogenous of the world.

Consisting of small quartz particles, this sand came from a process involving the Appalachian Mountains and the Apalachicola River 20,000 years ago. At the end of the last Ice Age when the world temperatures began warming and the ice caps began melting, large volumes of water were carried by the rivers to the world’s oceans. The Apalachicola River, rising in the Appalachians, carried water to the Gulf of Mexico and continues today.

This water carried the quartz particles from the rock that forms the Appalachian Mountains and deposited them in the Gulf of Mexico, just 125 miles to the east of what is now Destin. As the sea level began to rise, these quartz sands eventually formed a new shoreline. The sands today continually replenish and reach as far west as the Pensacola Pass, their final destination.

Come for a visit.....stay for a lifetime!

Find a Home in Destin